The Byzantine Church of Agioi Apostoloi 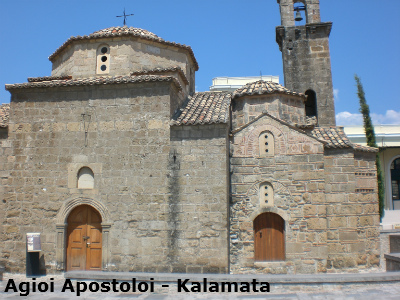 Agioi Apostoloi is a Byzantine church, built in 1317 by the Emperor Andronikos in March 23 Square in the centre of Kalamata. On Wednesday, March 23, 1821, Theodoros Kolokotronis, together with the other leaders and Greek warriors liberated Kalamata from the Turks and assembled with the population and the clergy in the square of Agioi Apostoloi, where the first Christian mass was said on free Greek territory after 400 years of slavery. In this church the Greeks took an oath of loyalty to the revolution.

The church actually consists of two temples built five centuries apart as the two domes show. The first one in the eastern part of the church with free cross style was built in the late 11th to early 12th century and the second one with cross single room dome dates back to the Venetian rule of the late 17th to early 18th century. In the oldest part of Agioi Apostoloi are frescoes dating back to the 16th and 17th century, which have been preserved despite the extensive damage due to the earthquake in 1986.

Agioi Apostoloi suffered considerable damage twice in its history; in 1884 when part of the bell tower collapsed because of an earthquake and in 1892 when the Byzantine frescoes were covered with lime. After the earthquake in 1986 the church was restored back to its original form.