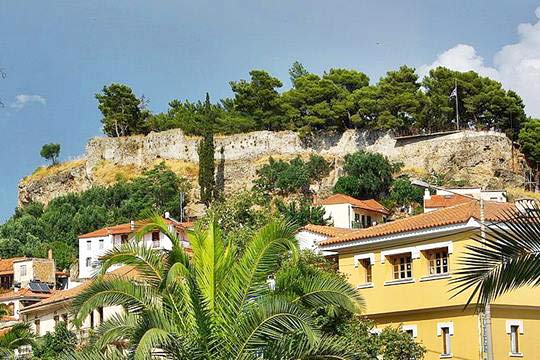 A castle with a rich history on a rocky hill at the North-West side of the city of Kalamata. An ancient acropolis existed on the hill before the Trojan war, and later a Byzantine fortress, but the ruins we observe today are the remains of the castle that was rebuilt there in the beginning of the 13th century, during the Frankish occupation.

In the 6th century AD a church was built in the castle devoted to Virgin Mary. An icon of Virgin Mary in the church became famous as ‘Kalomata‘, meaning ‘beautiful eyes’. This later evolved to ‘Kalamata‘, which became the name of the church, the castle and the city.

The ancient acropolis on the rock was founded by the figure of mythology Faris from Argos. The city was named Farai or Fares and is mentioned in Iliad as one of the seven cities that Agamemnon offered to Achilles to ease his anger. Fares never became an important city in the ancient world unlike other neighboring cities such as Messini. Archaeological excavations have proved that the city was on the hill and not in the surrounding area.

In early and middle Byzantine periods the place was inhabited and, certainly, fortified, but nothing more is known about its history. The growth started with the Frankish occupation. After the 4th Crusade and the Fall of Constantinople, Peloponnese and Kalamata were conquered by Frank knights. When Geoffroi de Villehardouin I became the ruler of the Principality of Achaea (1205-1218), he rebuilt the ruined castle and made it the seat of the feud of Kalamata. His son Guillaume II de Villehardouin who later became the most notable ruler of the Principality (12 46-1278) was born in the castle of Kalamata. The Franks held Kalamata until 1410 when the city became part of the Byzantine Despotate of Mystras. Before that, it was captured briefly by a band of Slav peasants in 1293 and by the Turks in 1396. From 1381 the area was under the control of the knights of the Company of Navarra who had the support of the House of Anzou and the kingdom of Napoli.

In 1459 the castle and the city were captured by the Ottoman Turks under the leadership of Mohamed the Conqueror. In 1464 the castle was taken by the Venetians. They left in 1540. The Venetians came back in 1685 under General Morozini. The Turks were unable to defend the castle against the Venetian artillery and evacuated it after destroying it. This time, the Venetians made some major repairs and additions to the castle. In 1715 the Turks came back. During the 18th century, although the city of Kalamata expanded, the castle was gradually abandoned and ruined. Kalamata was liberated in 23 March 1821, in the first act of the Greek War of Independence.